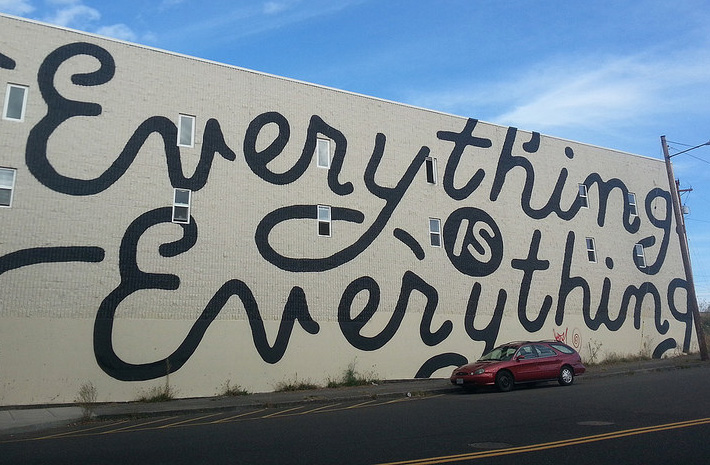 In relationship with the Black Arts Movement’s expression and Lauryn Hill’s recent release of the same title, this performance/workshop takes as its focus the connection between worlds – spirit and physical – and the relationship between all things as a source of wonder and something to struggle for.   It also interprets the title of this program, Breaking Text, and opens up the words of poetry into worlds of music, dance and video design.

Our work here connects to ancestral voices that challenge contemporary Western values of knowing and we offer ways of seeing that are non-traditional and draw on our body memory to see each piece as a voice to each other and to all worlds.

In this performance/workshop the play is between the infinite and its endless extensions, how that great silence creates being, what is both constant and ephemeral, evaporating into the nothingness – its origins: creativity, wisdom of things and nothing, the mind, nature, procreation, stability…it carries that wisdom and power and the take is of mystery, mysticism…of what we know and can never know. the ambiance is wonder…

This work begins with the voices of centuries, their stories and what they want known of them. It then opens to the lives of Black bodies and charts that dissonance. Through this it moves out beyond, recognizing the changing nature of all things and their connectedness.

This performance/workshop combines the poetry of charles c smith with the choreography and dance of Aria Evans and Jesse Dell and brings these together with video dance and video art. We began working on this last September and are honoured to share its development at Breaking Text 2017.

charles c. smith is a poet, playwright and essayist who has written and edited twelve books. He studied poetry and drama with William Packard, editor of the New York Quarterly Magazine, at New York University and Herbert Berghof Studios. He also studied drama at the Frank Silvera’s Writers’ Workshop in Harlem. He won second prize for his play Last Days for the Desperate from Black Theatre Canada, has edited three collections of poetry (including the works of Dionne Brand, Marlene Nourbese Phillips, Claire Harris, Cyril Dabydeen, Lillian Allen, George Elliot Clarke, Clifton Joseph), has four published books of poetry and his poetry has appeared in numerous journals and magazines, including Poetry Canada Review, the Quille and Quire, Descant, Dandelion, Fiddlehead, Anti-Racism in Education: Missing in Action (Canadian Centre for Policy Alternatives), the Amethyst Review, Bywords, Canadian Ethnic Studies and others. charles was the founder of the Black Perspectives Cultural Program in Regent Park and recently received a grant from the Ontario Arts Council’s Writers Reserve Grants Program and the Toronto Arts Council Writers Grants Program. charles is the Executive Director or Cultural Pluralism in the Arts Movement Ontario and Artistic Director of the wind in the leaves collective (www.windintheleavescollective.com), an interdisciplinary performance group combining his poetry with music, dance and visual arts which he founded in 2009. He also lectures at the Humber College post-graduate program in arts administration and was formerly the Lecturer, Cultural Pluralism in the Arts at the University of Toronto Scarborough. His new book of poetry entitled travelogue of the bereaved (TSAR Publications) was released in October 2014 along with his book of non-fiction The Dirty War: The Making of the Myth of Black Dangerousness (Canadian Centre for Policy Alternatives).  His chap book whispers was released in August 2014 at an interdisciplinary exhibit and performance at the Blink Gallery in Ottawa. Charles has received grants from the Ontario and Toronto Arts Councils for his poetry and for his work with the wind in the leaves collective.

Aria Evans works in film, dance creation and performance. She draws on her experiences as a woman of mixed race as well as her BFA to capture meaningful social and cultural themes through her interactive art. The Canada, Ontario and Toronto Arts Council’s have supported Aria’s endeavours as well as Jumblies Theatre, Native Earth Performing Arts and b current. Aria is Artistic Director of The Go To Company, co-Artistic Director of hub14, co-founder of The Research Exchange and a collective member of us. Her work in video dance has led her to being Kaeja d’Dance’s resident videographer and editor. Independently she has collaborated with many of Toronto’s leading dance artists and organizations. Aria has done vid- eography and editing for Dreamwalker Dance Company, Julia Sasso Dances, Ryer- son University, The Banff Centre, Dance Matters, CDA-ADC, YMI, Tziporah Productions and the Pulse Ontario Dance Conference, to name a few. Aria does film work for Hop To It Productions Inc. whose documentary work premiers on Network Television where Aria has associate producer, editor, photographer and videographer credits.

Jesse Dell is a graduate of the dance program at York University Jesse Dell has worked as a contemporary dance artist for over a decade, performing across Canada and the USA while creating over ten original choreographic works, with a particular interest in transdisciplinary creation. Jesse has had the privilege of performing work by Peggy Baker, Aria Evans, KateFranklin, Susan Lee, Shannon Litzenberger, Tracey Norman, Julia Sasso and Holly Small, as well as for The Canadian Opera Company, Kaha:wi Dance Theatre, the National Arts Centre, Larchaud Dance Project and JDdance, a collective she co-founded in 2009. As a choreographer, Jesse has created work for the Art Gallery of Ontario, Buddies in Bad Times Theatre, The School of Canadian Contemporary Dance Theatre, and Festival of Dance Annapolis Royal. As a video artist Jesse has had work presented by Dans Kamera Istanbul, dance: made in canada/ fait au canada Festival and Galerie Crystal Ball Berlin. As a vocalist and songwriter Jesse has explored many genera’s, including contemporary/electronic/jazz fusion working with producer Bobby Boyd, to performing with Duke and the Dell-ites, an eight piece Motown band that played at The Reservoir Lounge weekly for two years. In 2014, in collaboration with singer, songwriter and musician Sophia Perlman Jesse created and presented Karaok-me, a full-length work blending live music, dance and theatre.