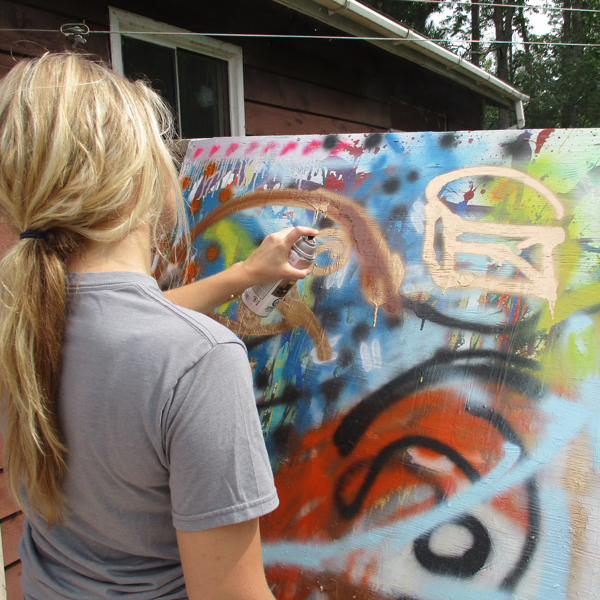 REPORT: The Future in Safe Hands Collective conducted a series of intensives, workshops and collaborative actions as part of their OAC Northern Arts project, “Break Something” that took place during the months of February – May. This project allowed all participants to bring their practices forward and had many unexpected additional benefits beyond our original planned actions.Over the 4 months of working together many members of FISH managed to develop deeply connected relationships to each other resulting in a better team effort. There were many days of discussion and making including a spontaneous day of puppet building and performing conducted by Morgan Bedard, Kelsey Ruhl, Clayton Windatt and Joshua Bainbridge at the Capitol Centre’s “Children’s Festival”. An original work was written by Joshua Bainbridge and performed by the quartet for 2 shows in 1 day reaching 100+ children. http://www.capitolcentre.org/ In addition to micro events such as this many nights were spent as a group engaging in future talks and exploring potential avenues that each artist could follow. This work resulted in some divisions between members but not in a competitive or destructive manner. It led to the development of the Proscenium Club led by Joshua Bainbridge, which was created to take actors further and create CAEA productions paying union rates for performances. The first of which is now scheduled for fall 2016. Proscenium Club allows for Joshua to produce his original written works and have them published through the Playwrights Guild of Canada. Additionally, Tara Windatt and Meg Paulin have formed the Black Cabin Collective to pursue their visual arts research collaboratively. All these members have agreed to continue as part of FISH but FISH is now directly responsible for these new collectives forming creating further opportunities for artists in our region.

Ice Follies: In partnership with Aanmitaagzi, members of FISH were able to engage in the development and creation of several puppets and installations as part of the Ice Follies Festival. These creations were part of the SERPENT PEOPLE project that Aanmitaagzi has recently begun and will be continuing for the next 2 years. Artists Meg Paulin, Tasheena Sarazin, Tara Windatt, Clayton Windatt and Cole Stevens all helped in different capacities and performed at opening night of the festival. Additionally, FISH members created an installation in Big Medicine Studio and received Exhibition Assistance funding to present their collaborative work there. http://icefollies.ca/home/

FAAS 5: The Future in Safe Hands Collective was invited to contribute to Abricadabri, which was the theme for the Fair of Alternative Art Sudbury. Meg Paulin and Tara Windatt were designated as our visual artist team to create an installation wigwam on site. The installation originally had a planned performative component but this aspect was never fully developed and it was decided to present the work as a multi-media installation instead. Both artists were paid artist fees for their work and were recognized publicly by the event. http://gn-o.org/en/expo/faas5/

Writing Development: Joshua Bainbridge worked on the development of 3 different plays during this project and had support from several members of the collective as his writing was being edited/refined and reviewed with peers. Cole Stevens also conducted a written body of spoken word pieces that were peer reviewed. After a volume of rehearsal and readings the works were ready for presentation and both artists were able to present at the 2016 ON THE EDGE fringe festival in August. http://fringenorth.com/

Mask Making: Working with the Aanmitaagzi Summer Arts Program in partnership with FISH, Clayton Windatt conducted 3 separate mask-making workshops and 1 movement exercise using existing masks from the Train of Thought project. The ASAP team explored movement with FISH members at Duschesne falls with photography done on-site by members. Exploration of movement through animals with the intent of making imagery through photography resulted in promotional materials for future Aaanmitaagzi and FISH events. The Mask-making workshop was an exploration of the SERPENT PEOPLE story making masks that represent transformation. These masks will be used in performances for Aanmitaagzi as they move forward with their multi-year project. The second was a mask making session creating uniform masks for a short film entitled “The End of the World” filmed on-site using 8mm film. The third workshop was creating radical masks using found objects and spray paint to create both horrific and dystopian imagery.

Spoken Word / Monologue Development: Cole Stevens conducted a 2-hour workshop with ASAP and FISH exploring the natural world and translating emotions and visual impacts into literary artwork. The resulting Spoken Word pieces were performed at the ASAP end of summer bash. This was the first professional workshop that Cole had ever conducted and was supervised by Clayton Windatt. Cole did an exceptional job both conducting the workshop and receiving feedback for his actions.

Graffiti Set Techniques 101: This full-day intensive allowed 5 FISH members to engage in a variety of painting techniques both for set dressing and for graffiti creation. Both flat surfaces and 3D objects were engaged with resulting in a wide variety of painting techniques and outcomes. Kelsey Ruhl, Tara Windatt, Andrew Carter, Ember Windatt and Kaitlyn Stewart all worked with Clayton Windatt on individual projects and collaborative works. The results were a large series of NEOISM works that can be sold or auctioned off in the future by the collective. The techniques gained will be extremely useful when the next set needs to be built as we now have a team of painters ready to get involved.

Leadership / Team Building: Tara Windatt, Kelsey Ruhl and Joshua Bainbridge have spent a great amount of time discussing the collective’s future. Each of these members have transformed their careers through FISH and now look at how FISH can become a yearly sustainable series of actions. It has been determined that FISH needs to make a strategic plan to ensure long-term survival and effectiveness. It has also been determined that new members must be brought onto the team as several are either moving away or have now become professional artists with their own independent practices. A retreat for Clayton Windatt, Tara Windatt, Joshua Bainbridge and Kelsey Ruhl has been planned for the end of summer to explore this further.

The FISH Collective is incorporating and forming a board of previous members to ensure that mentorship, training and collaboration remain accessible in our region of Ontario. We are expanding and forming new partnerships as well as establishing ongoing actions through a few festivals that we hope will become ongoing and sustainable. Several of the events developed from this application are expanding and becoming larger future events. Clayton Windatt is pursuing the “Break Something” theme as a large-scale Indigenous performance in partnership with the Proscenium Club to produce a professional touring show in 2017. Many members are now applying for their own projects with the intention of collaborating further with FISH in the future.

Our planned installations at Ice Follies 2016 dealt with the transmission of information generationally and how the future will be impacted by our decisions today. We conveyed this by creating a large media-arts installation entitled “Break Something”. “Break Something” is a reflection on the constraints of modern day society where we all feel bound to societies actions and plans. Apathy and the hyper obsession with ourselves are our planet’s worst enemies. Life is easier when we focus on our own tiny lives and refuse to look at any big pictures. Future in Safe Hands and their upcoming work “Break Something” asks you not to look at the macro or micro but the regional context of the North. Always the optimists, FISH wishes to break these constraints of the north and openly discuss issues that are hard-hitting and relevant to our region. Discussions about the Missing and Murdered Aboriginal women, the Energy East pipeline, drinking water being freely given to large corporations by our governments, fishing rights on Lake Nipissing, Treaty Rights between Nipissing and Canada, the Ring of Fire development and many, many more issues that relate to our local region but affect the entire world. “Break Something” is asking you all to cut the ropes that bind your hands, take off the blindfold and do something about the world outside your door before that world stops… just stops in all ways…

For our involvement in Ice Follies 2016, FISH conducted a series of collaborative development sessions, which led to the creation of a series of media-arts installations in Aanmitaagzi’s Big Medicine Studio. We received Ontario Arts Council Exhibition Assistance.

The fabric installation in Big Medicine Studio took 2 full days to set up. By using 4 projectors and 2 laser systems FISH was able to create a series of videos representing serpents colliding with each other and overlapping in series of loops. This narrative feeds into Aanmitaagzi’s current project Serpent People as they are conducting a three-year project exploring the local legends of Lake Nipissing. During the creation of this work, FISH discussed the themes of intersecting points and how the mass of jumbling snakes portrayed in the videos combined with the imagery of fish schooling represented much more than esthetic appearances allow. To us, these videos represented the churning conflicts that we had set out to explore and how one project cannot accurately summarize any of the notions that we currently discuss. We plan to continue this work and engage further both with Aanmitaagzi and with the concept of Break Somehting.